Baker Mayfield’s been in the news a lot lately.  With good reason.

The number-one drafted, Heisman Trophy-winning, boastfully flag-planting, sidelines crotch-grabbing, far-too-short to play the pro game, Johnny Manziel comparative is the new face of the Cleveland Browns.  He is the next among a long list of quarterbacks that the NFL’s most historically, downtrodden franchise has selected to do something never done before: lead the Browns to a Super Bowl.

Mayfield’s been making appearances lately.  Dressed as dapper as can be, he showed up at the ESPYs where he received an award for the year’s best college athlete.  More notably, he appeared on Colin Cowherd’s nationally televised radio program, clapping back at Cowherd’s perhaps founded, perhaps not criticism of Mayfield’s college antics at Oklahoma.  It was the most combatively electric moment we’ve seen between sportscaster and quarterback since Jim Rome interviewed Jim Everett.  Anyone who puts Cowherd in his place, which Mayfield clearly did, is okay in my book.  Here’s the clip in case you missed it.

Mayfield has moved on from Oklahoma and appears to have brought a level of maturity none of us outside that Norman locker room never knew existed.  His college hijinks no longer matter as Mayfield is now a professional and looking to take the next step in his career.  Let’s be honest, he’s (fortunately) no Jameis Winston who continues to set the bar low for how NFL quarterbacks should act.

Since being drafted, Mayfield has toed the company line.  We’ll find out much more about him when HBO airs Hard Knocks, which will shift this season’s focus to the Cleveland Browns.  Cleveland is the perfect target for the network’s annual training camp expose as it has all the elements HBO looks for in a team: a marketable young quarterback, a franchise that hasn’t made the playoffs in ages and the ever-present element of drama. 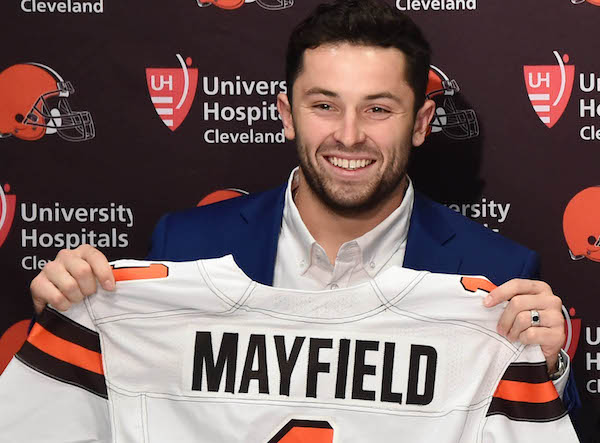 With everything on his plate, Baker Mayfield has to fail, right?  I mean, he’s a Cleveland Browns quarterback.  The odds are stacked against him.  I could list the names of those who have come before him but I’d run out of internet.  The last time the Browns had a winning record was 2009.  They went 10-6 and Derek Anderson was taking snaps.  In 2002, they went 9-7 with top drafted Tim Couch as their quarterback.  That was the last time they made the playoffs.  In 1994, they went 11-5 with Vinny Testaverde as their quarterback.  That was the last time Cleveland won a playoff game.  Those were the only three seasons of the last twenty-five that this team has finished over. 500.

As if that wasn’t enough, he’s playing for a coach who has won only one game in two years.  He has a top wide receiver who can’t stay on the field for a variety of personal issues.  And he’s playing in Cleveland, a team that’s had less success than arguably any other team in the league for the last half century.

I’ll be honest.  I’ve never been a fan of Mayfield but I’m not from Oklahoma either.  The media has consistently portrayed him as immature, a braggard and yet another great college quarterback who will amount to little in the pros.  Just when we thought he might be sitting for a while on draft night, Cleveland did the most Cleveland thing ever.  They drafted him first overall over a slew of quarterbacks that other “experts” ranked higher.  Few outside the Cleveland war room understood the decision.  The Browns were just fine with it.

Right now, the honeymoon runs romantic in Northern Ohio.  LeBron may have skipped town but the Browns once again start the season 0-0 with a team full of promise and their next quarterbacking project eager to make his mark.  No one expects immediate success.  Heck, it may take him a while to start.  But the future is his and all Cleveland can do is hope for the best, as they always have, rather fruitlessly.

I could easily jump on the anti-Baker Mayfield bandwagon and hate on the guy, finding flaws in his character and casting the bazillionth stone but what good would that do?  With no dog in this hunt, I’ll be honest.  At this point, I can’t help but root for the kid.  Besides, if the Astros, Eagles and Capitals can all win titles, I suppose the Browns making progress isn’t outside the realm of unlikelihood, as ridiculous as that might sound today.

Mayfield may fail miserably just like his numerous, Brown-clad predecessors.  It is the most likely of outcomes.  But if this kid can do something no one expects him to and prove his long list of haters wrong, well, that’s a story I can get behind.

His journey begins now and we are all along for the ride.

14 thoughts on “Making a case for Baker Mayfield”