I am irked by the smallest signs of inconsideration.

Whether it’s a fellow driver not sending an acknowledging thank you wave through his rearview mirror after I’ve let him merge into traffic (more on that in Volume Two) or any other random act of selfishness, I am far too often confounded by how my fellow man continues to treat one another.

Having grown up in New York City, a place where most inhabitants rely on public transportation to get around town, I was taught that when sitting on a crowded bus or subway, it’s proper to always offer your seat to a lady or elderly person.  I was also instructed to hold doors open for others in need.  This lesson was imprinted upon me by my mother, father, grandmother and great grandfather so much so that to this day, I still go out of my way to open the door for others.

It’s just the right thing to do. 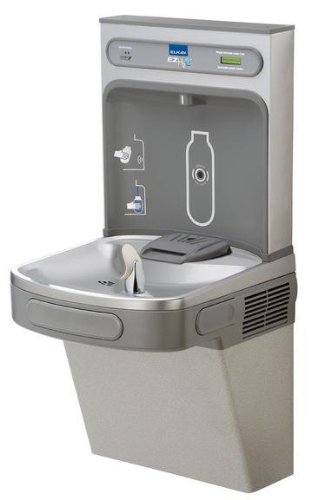 Which brings us to water fountain etiquette in 2018.

I don’t know if you’ve noticed these newfangled, 21st century, water fountains but they are all over my YMCA.  They allow the thirst-bearer to not only drink cold water from the spout but also fill up their personal water bottles as they see fit.

That’s all fine and dandy.  Work efficiently, I get it.  I’m generally not one to bring a water bottle to the gym because a) I don’t feel like lugging it around and b) there are enough water fountains interspersed throughout my gym that I’m never far away from one in case I’m feeling the need.

I am in the minority, however, as it seems that everyone at my gym is carrying a fancy, insulated, water container they’ve paid far too much for at Stein Mart.  As George Carlin once quipped, “When, as a nation, did we become so dehydrated?”

I don’t care how you accessorize when gymming.  Carry with you your towels and iPad arm bands, your water bottles and FitBits.  Just don’t bug me while I’m cranking out weights to my Rage.

But what is protocol when filling up a water bottle with a line of thirsty, sweaty people forming behind?

It is just me or does it seem wholly inconsiderate for a person to stand there, filling up their 32 oz. water bottle, while the rest of the gym taps their feet while waiting in line behind?

When I hit the water fountain, I’m on a mission.  Give me enough water to cool off and I’m on to the next machine.  I don’t have an extra ninety seconds to wait for some nincompoop to make sure he’s getting his 64 ounces at my expense.

Doesn’t it seem like the right thing to do to allow someone to pass before you fill up you jug o’ H2O just as one would give up one’s seat on a crowded bus or subway or hold the door open for a lady?  Yet no one, and I mean no one, has allowed me to pass before their water bottle is filled to the brim… and this includes YMCA employees!

When you line up at a crowded grocery store with a cart full of goodies and notice the person in line behind you with only an item or two, do you let them pass?  If not, why wouldn’t you?  Again, we’re talking about common courtesy.

Maybe I’m making too much of this whole water fountain situation.  Or maybe I’m just thirsting… for some civility.

14 Replies to “Water Fountain Protocol and Other Things Wholeheartedly Wrong with America, Vol. 1”