He hasn’t reached Brett Favre/Michael Jordan status quite yet but one more retirement party and he’ll earn a set of steak knives.

When it comes to all things Ohio State, I like to go to my long-time partner in crime, Croshere.  He’s a Buckeye alum and as diehard as they come.  Considering I graduated from Florida and he Ohio State, I found it appropriate that he and I openly discuss our once and former coach and his past and present future. 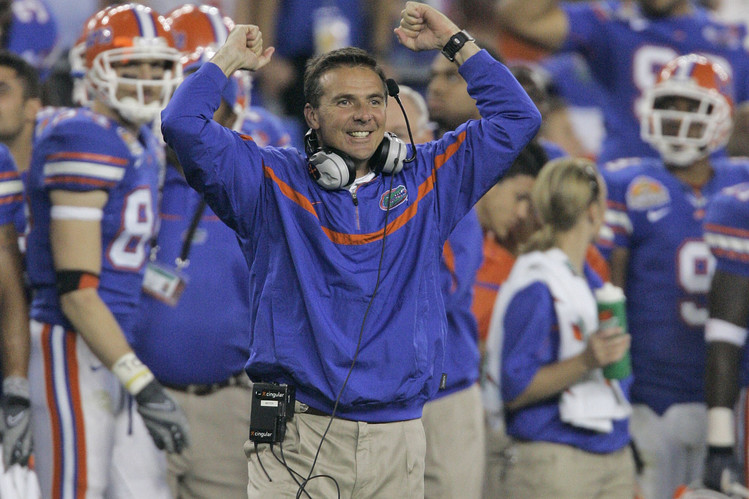 Croshere, you and I joked many years ago, once Meyer landed back in the state he was born and at the college where he cut his teeth, that it was like you and I dating the same girl… and she was a looker.

Now, we’ve both been dumped by that same girl.  While she sure as hell showed us some good times, I feel like we’re now both sitting at the bar drowning our sorrows, me consoling you because I’ve been there and done that and you a little weepy because, while you may have seen it coming, you didn’t expect for it to happen so soon.

Meyer once again cited health reasons for leaving a big time, college program yet you and I know in both instances there was more to it than that.

Now that the wound is still fresh, how are you feeling about the Meyer situation?

How important is the record against Michigan?  If I could hypothetically replace the national championship for an 8th win against Michigan, I’m in.  Might seem silly to those outside the Ohio State football family, those inside would get it.

Urban gets it. Tressel got it. Cooper didn’t.

On to Urban. As the Chump knows, when the kid from Ashtabula decided to bring the mojo that built BG, Utah, and the Chump’s Gators to OSU, I was enamored. It was like the Chump was done with his super-hot girlfriend I had lusted after for years, and now, she was mine. 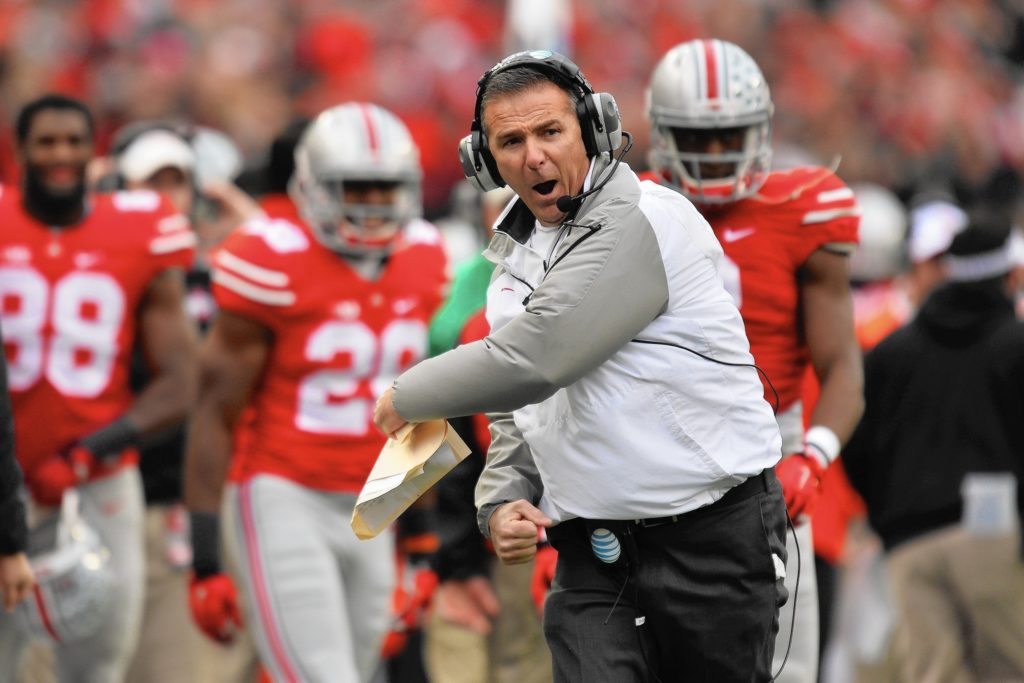 The seven years were like a montage similar to Leslie Nielsen and Priscilla Presley in the Naked Gun Movies. I was smitten.

So, as we part ways, I ask myself, could he have been my Woody Hayes? My soulmate? The coach for 40 years? 40-0 against Michigan?

Then reality set in.

He ignored a credible claim of abuse from the wife of an assistant coach, and kept him on the staff. He knew it, he did nothing, fact. That’s hard to get around. Impossible to get around really.

Woody punched a Clemson player, and Tressel let his players keep and sell shiny trophies. Both left Buckeye Nation under odd circumstances. They are both forgiven.

SportsChump: Agreed, sir.  I think many of us Gator faithful turned a blind eye to the goings on in Gainesville when Urban was there, the Aaron Hernandez story obviously the most troubling of all.  Either we knew about it and didn’t want to pay attention or the Meyer/Florida camp was pretty damn efficient at covering things up.  There were other rumors surrounding Meyer as well.

For those of you reading who don’t know Croshere, he and I talked extensively during the whole Zach Smith situation which ultimately led to Meyer’s suspension.  I can assure you that Croshere is a man of his word.  While he enjoyed the prosperity that Meyer brought to his program, he didn’t at the cost and attention it brought them.

I also think Meyer’s legacy in Gainesville would have been different had he not almost immediately jumped ship to another school.  Now he seems more of a hired gun.  Two national championships are nice and all yet I know some people, present company included, who felt like a lover scorned once he left.

Now, on to the question at hand.  Do you think Meyer will coach again and if so, how would Buckeye Nation feel after he told everyone his health simply couldn’t take it anymore, a line we’ve all heard before?  I’m not sure there are too many college gigs better than Florida and Ohio State but what if he took an NFL gig?  I can’t necessarily see him taking another job that close to home but that Cleveland Browns job sure does look appetizing with all that young talent.

Can you set a line that we see Meyer coaching again?

Croshere: It is hard for me to see Meyer as a head coach of another major college program or an NFL team at any point. I would make that 5 or 6-1 against. It could happen but I don’t think so.

Timing is a big factor in this, both because he did cite health and all the ‘off the field’ issues are so fresh in everyone’s mind. If at least two years pass, and he could contend his health problems have stabilized, he is a much more likely candidate.  Plus, people are willing to forgive and forget over time. Mike Vick was on an NFL roster almost immediately after getting out of prison. We all know what he did, and we all know how much everyone loves dogs. He got a pass. I think over time Urban Meyer would too. After all, he didn’t actually do anything criminal, he just ignored other problems with people under him. Still, I don’t think so.

I do believe Meyer will get back into football in some capacity. Maybe an AD or consultant?  I could even see him taking the Tressel path. Consult for a year with the Colts then Vice President of Strategic Engagement at Akron? None of us know what that title means (at least I don’t, and pretty sure you don’t either, whoever you are). That was Jimmy T’s title though. What the title does actually tell us is that Akron wanted to pay Tressel to help them win football games. A lot of schools would want to do the same thing for Meyer. 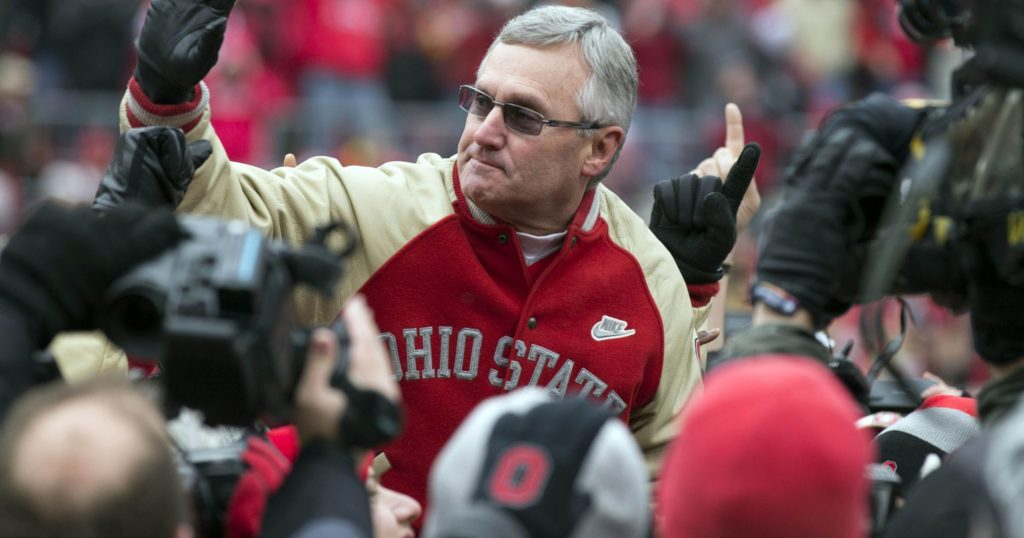 The ‘when’ becomes the question. I would be surprised if he is not completely out for two years minimum. This type of role would also minimize the stigma of the health and ‘off the field issues.’ I would see a role that doesn’t have an extensive amount of direct reports or overseeing individuals, which eliminates concerns about a repeat of mismanagement with players and assistant coaches. As far as health, eating a sandwich in a warm luxury box is a bit different from firing your headset down and screaming at the top of your lungs in front of 100,000 screaming fans.

I think we will see him again, just not as a head coach.

SportsChump:  No sooner do we put this down on paper does Ohio State announce that Urban Meyer will stay on board as a consulting role.  I guess his title is now officially assistant athletic director.  He will also teach a leadership course on campus part-time.  Insert ethics joke here.

I think it’s safe to say that winning coaches get passes.  Bobby Petrino wrecked his motorcycle with his mistress on the back of it, gave a press conference with a scuffed-up face and neck brace and Louisville hired him back.  It took Rick Pitino running a brothel on campus for that very same school to finally let him go.  So, Meyer turning a blind eye to a coach smacking around his wife pales in comparison to some other sins we’ve let slide for wins.  Still, him teaching a class in ethics is relatively easy to poke fun at.

If Ohio State wants, they should have enough coin in their coffers to keep him on campus.  Spurrier served as consiglieri to Florida for a while which was at least good for a recruit or two.  Phil Fulmer eventually landed himself a gig as Tennessee’s athletic director after serving as an advisor to the president once they decided his time on the sidelines was done.  Meyer’s presence on campus, while not on the sidelines, might still be good in turning a recruit or two but this is now Ryan’s Day.  (Ryan Day’s day?)

Now let me add a wrinkle.  You and I both know guys like Meyer are cut out for the competition.  He’s not healthy but he’s not old either, at least not by college football’s coaching standards.  I’m not too sure his competitive nature will allow him to sit behind a desk with that sandwich for very long, even if it’s by doctor’s orders.  That’s not to say the world of assistant athletic directing isn’t all that demanding.  I just think this guy was meant to roam the sidelines and as you mention, throw his headset every once in a while.

I’m not too sure we’ve ever heard from him a desire to coach in the NFL.  At this point, why soil an already solid legacy, right?

But what if?  Few coaches have made that transition successfully #PeteCarroll but wouldn’t that give him a one-up on Saban if he can get it done where Nicky couldn’t?  Or don’t you think he thinks like that?

Croshere: I just hope you include the date and time stamps on this discussion. There you have it.

Assistant Athletic Director i.e. help us win games without being the coach. I did think there was going to be a ‘down time’, but, I guess not. I do think the interesting question is going to be how involved he is from the luxury box. I still think it is different, but, to your point, the passion is still going to be there. Even if you are not on the sidelines throwing your headset, I suppose you could still have a cerebral hemorrhage over your sandwich in the war room.

Then, of course, there is the question of who is in charge of the program ultimately? Is Urban Meyer going to be the Dick Cheney of OSU football? Is he still the head coach, and Day is vicariously throwing the headset for him?

SportsChump: Which I suppose only leaves us with one last question.  Will Christian Bale play fat Urban Meyer in the movie?

I guess for me it’s just hard for me not to imagine the guys on the sidelines or at least suppressing the burning desire to be there.  So, if you put that Urban Coaching Again number at six to one minus, I will take your wager… and I’ll bet you a sandwich.

9 Replies to “Florida and Ohio State alums mull over Urban Meyer’s past, present and future”