Before we get to our first football contest of 2019, let’s close the loop on some other contests we hosted last year.

Every season for eight seasons, I have hosted an NFL over/under contest where readers choose ten teams and decide whether those teams will win either over or under the amount of games Las Vegas has predicted. 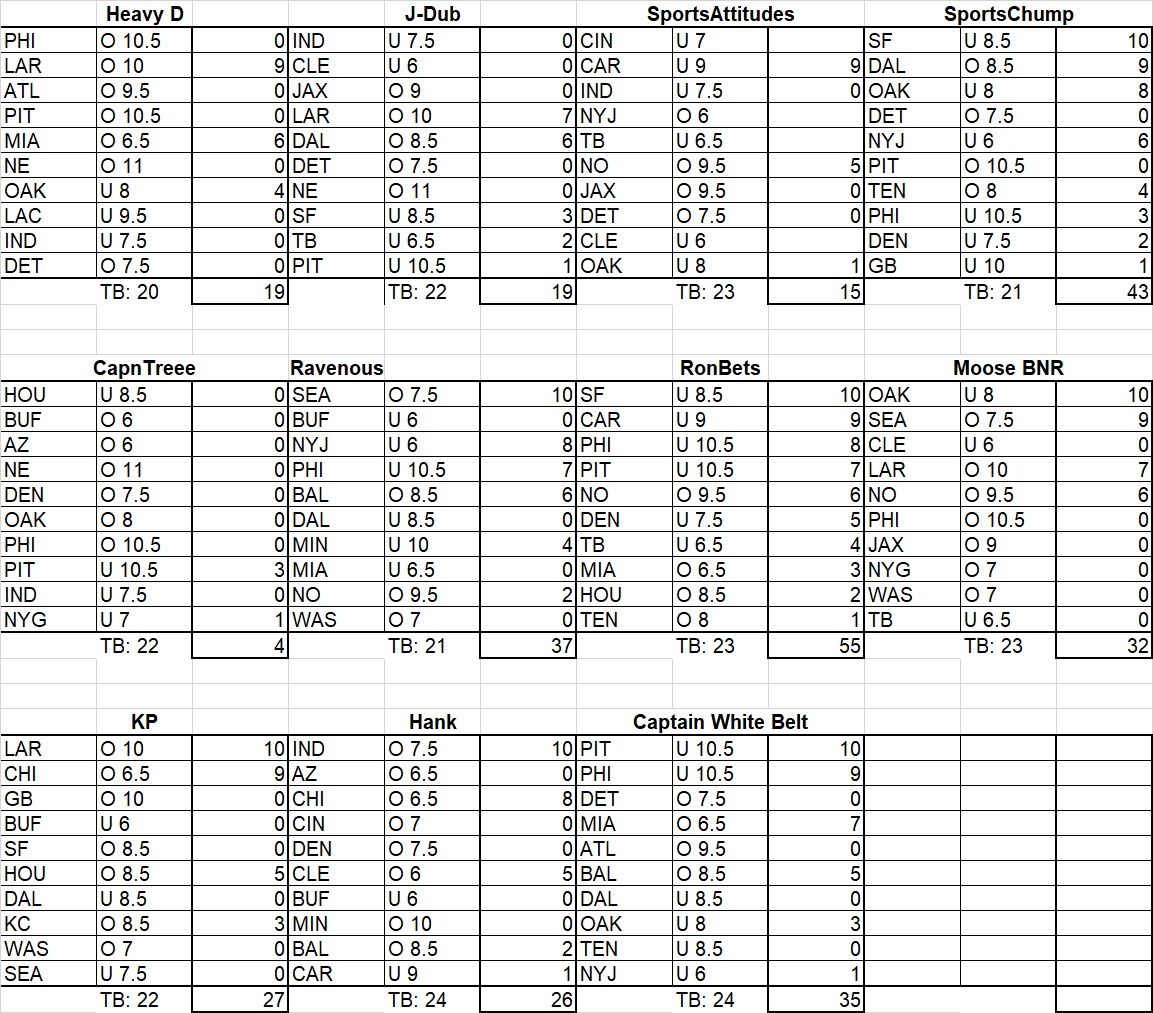 Here are your standings for this year’s NFL over/under contest!  Bets, I believe you’ve already won a t-shirt but if you haven’t, by all means, send me your particulars and I’ll send you out some swag to wear to your local sportsbook with pride.  Ten for ten is no small feat.  Here’s hoping you threw some real money down on your hunches for us out in the desert.  Thank you, sir, for setting a new standard for excellence in the contest.

Now onto our 2018 weekly pick ‘em contest.  We’ve already congratulated KP for polishing us all off with a week left to play.  He is running home with $50 of my own money.  (He gets to keep the $50 he ponied up for the contest.)

In case you were interested, here are the final standings from that madness:

Now, on to the contest at hand.

I asked you all to pick me five consecutive winners, no point spreads, beginning with the opening round of the NFL playoffs, the national championship game and onto the remaining playoff rounds, figuring it would be difficult.

Little did I know how difficult it would be. 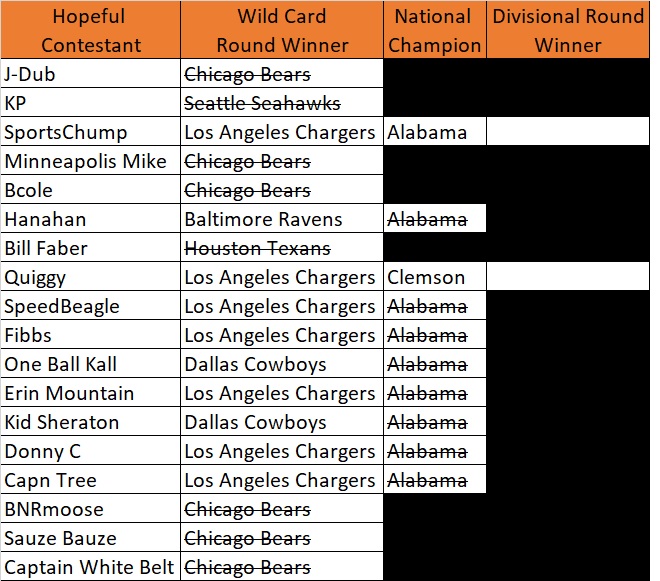 18 people entered. Thanks to the Texans, Seahawks and Bears, eight people never even made it to their second pick.  Thanks to Clemson, only one remains.  That person is Quiggy, a SportsChump newbie.

Initially, I was going to give the prize to the person who could pick five consecutive games, figuring not a single one of us would be able to do so, which is a paradox in and of itself.  There to fore, in theory, no one would win the prize.  Since Quiggy was the only one to pick TWO consecutive games, I’m calling the contest a wrap and proclaiming him the winner, however, in the spirit of the contest, he has agreed to continue picking as the rest of us watch on with bated breath.  Please enter your picks below.

I debated long and hard over to whether to offer him the prize but if you’ve been with us for any extended period of time, you all also know SportsChump has a loving heart.  Besides, eliminator pools generally end when only one person is left.

The point here was to prove how difficult it is to pick that many games in a row correctly.  I think we all did just that.  Well, everyone but Quiggy.

Please do tell us who ya’ got this weekend.  That way we all know who to bet on.

It also bears mention that Quiggy hosts his own blog (confounded bloggers!) called The Midnite Drive-In wherein he apparently must watch a lot of Clemson game film.  Feel free to pay him a visit.

E-mail me your particulars, sir, and I’ll send off the goodies as soon as possible.

Thanks to all again for participating and stay tuned for the next contest coming to an independent website near you…. And Quiggy, keep pickin’.