I’ve worked in television stations before.  I grew up in a journalist’s household and have been in and out of literally countless newsrooms for most of my life.

I understand the rigors of putting together a successful news broadcast.  Like anything else, I also know how easy it can be if you simply pay close enough attention to what you’re doing.

A seemingly minimal yet still crucial part of a newscast is called “supers.”  A super is the text you see on the screen during the broadcast that tells you what’s going on in that particular story.  It can be something simple like “President Trump Continues Push to Build Wall” or something completely arbitrary like “88-Year-Old-Woman Wins Local Lottery.”

Either way, the purpose of the super is to encapsulate in a few words and in an informative manner what’s going on in the report.

These supers don’t appear magically.  There’s a person in the studio typing these supers and cueing them into the broadcast.  Now, back in the day, there was no spell check and every once in a while, a word in a super would be misspelled.  It’s an honest mistake.  I’m not too sure there’s spell checking nowadays but it wouldn’t surprise me if there was… or was not.

Either way, the person sitting behind this keyboard has the important job of keeping the viewer informed and perhaps even more importantly, spelling things correctly.  That last thing a news report wants to do is look unprofessional, keeping in mind that when things get spelled incorrectly, one misplaced letter or punctuation mark can make a world of difference.  As my massage therapist/grammar Nazi likes to say, it’s the difference between knowing you’re shit and knowing your shit.

Well, a recent broadcast didn’t know their shit before taking to the air in what turned out to be an unintentionally, sexual celebration of March Madness.

In a shocker this weekend, the Auburn University Tigers college basketball team upset the Tennessee Volunteers in the SEC Championship game.   That means Auburn is going to the big dance.  Someone at a Birmingham television station, however, fell asleep at the wheel when reporting the story.  WIAT, CBS Channel 42 in Alabama, reported that Auburn not only won the basketball tournament but also succeeded at another, more personal type of dribble penetration. 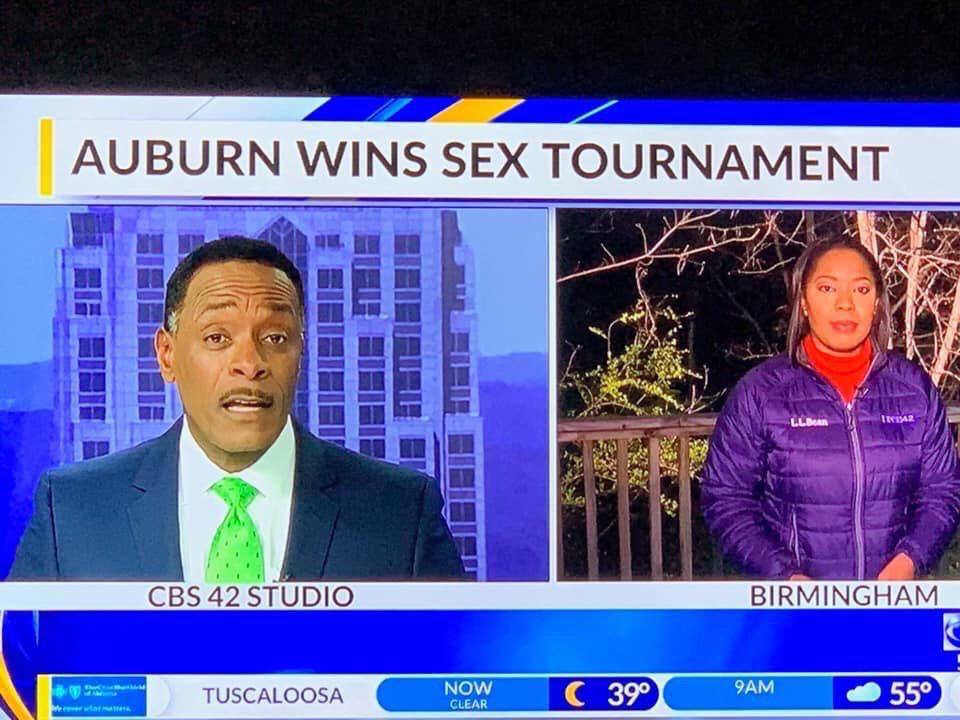 For those of you who aren’t college basketball fans, I’m pretty sure the little man in the booth meant to type “Auburn Wins SEC Tournament” and not Auburn Wins SEX Tournament” although maybe there are some extracurriculars going on at War Eagle of which I am unaware.  Talk about Madness!

Either way, the gaffe made for good fun.  I’m not necessarily sure this is a fire-able offense but I’m pretty sure that for the next few weeks, the person typing in these supers will pay a little closer attention to his keyboard.

2 thoughts on “Auburn Wins Sex Tournament: A Tale of Unfortunate Yet Hysterical Misspelling”