I go to the race track once or twice a year.  When it comes to betting on horses, I pretty much roll the dice.  There is no method to my madness.  I simply look at the biggest underdogs, box them with some favorites and hope for the best.  That’s why I’m not an NFL general manager.  Well, for that and a million other reasons.

Horses aren’t the only animals that have an in-depth, nearly impossible to read numerical analysis listing their strengths, weaknesses and past performances.  Humans do too, especially when it comes to the NFL Draft.

This year, for the very first time, Sports Info Solutions has put together their own racing form, a tome that 32 NFL franchises are hoping (and perhaps praying) will change their direction for the better.  Consider it a cheat sheet on steroids (poor choice of words) for every single college football player eligible to be drafted.

“Developing a successful combination of statistical analysis and scouting eyes on the field has been the holy grail of professional sports for many years.  One of the biggest factors that distinguishes football from other sports, however, is the large number of rookies who come into the NFL each year.  Where are avid fans to look for real information on the rookies who may have the most impact?  The answer to that question is in your hands.” 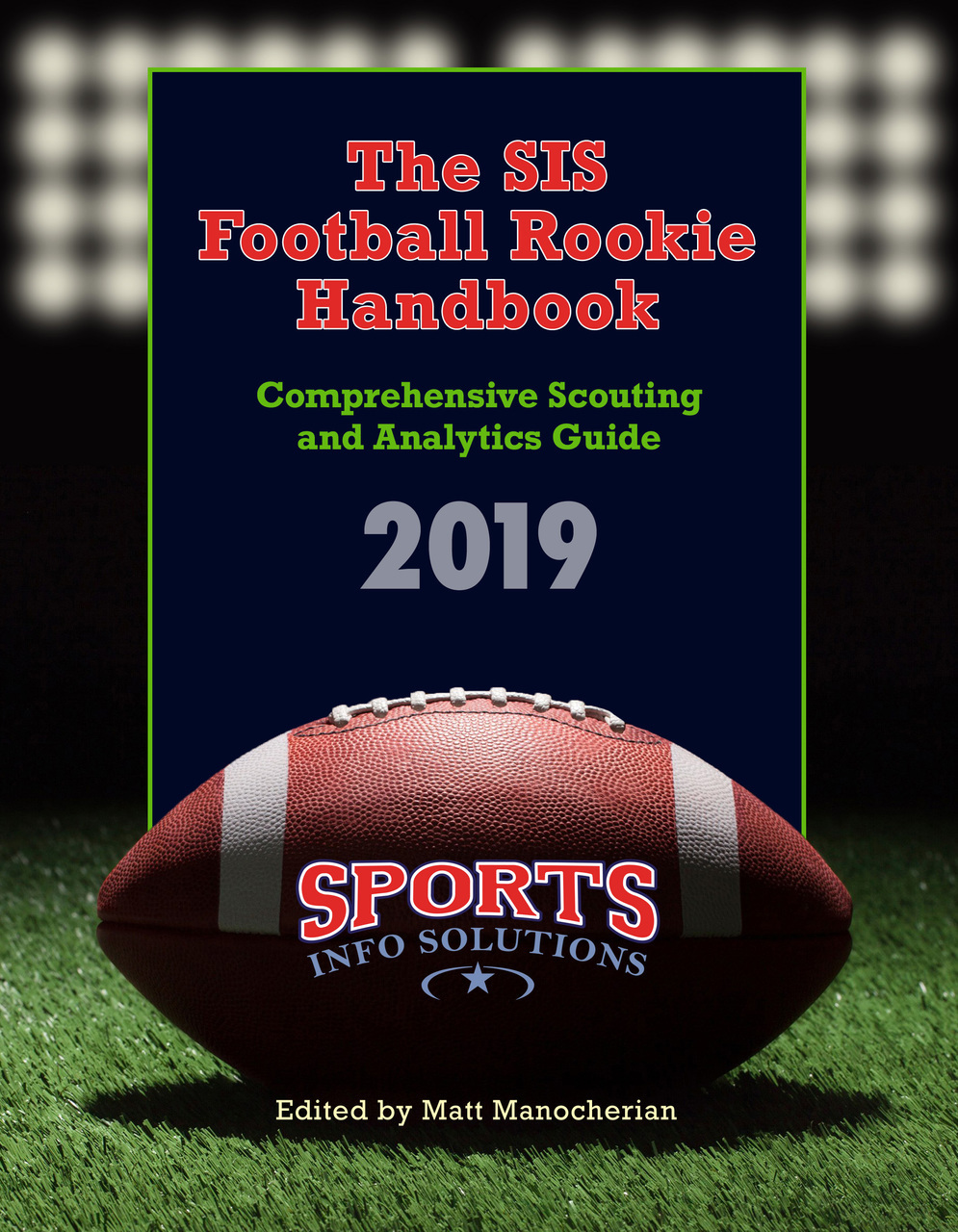 Sports Info Solutions’ The SIS Football Rookie Handbook: Comprehensive Scouting and Analytics Guide 2019 is an exhaustive look at each and every rookie that will have an impact on the NFL franchise that drafts them.  The tome is edited by Matt Manocherian who is probably still recovering from all the work he put into this book.

As you might imagine, this 600+ page manual breaks down every athlete at every position by every imaginable skill.  Quarterbacks, running backs, wide receivers, tight ends, tackles, guards, centers, nose tackles, edge rushers, middle linebackers, weak side linebackers, cornerbacks, safeties are graded by their instincts, vision, impact, elusiveness, speed, toughness, route running, blocking, separation to name only a touch of what is discussed in this most-likely-soon-to-become-essential draft manual.

I can’t see how this book will not adorn every NFL war room and GM office from now until draft day and long afterwards.

“Sports Info Solutions has the largest collection of football scouts under one roof – bigger than any NFL team – with over 50 video scouts grinding the proverbial tape.”  This massive group of NFL gurus proudly present what they call their “February draft board.”  They use a Bill James approach to analytics, doing their best to quantify a player’s worth.  As if NFL GM’s don’t have enough to think about, this book intends to make their lives a little easier.  After all, if they get it wrong, they can always blame the book, right?

Before getting into the positions and players sections, the book sports a few brief chapters for the football geek in you.  They analyze what the numbers tell you to do on 2nd-and-10, the pros and cons of run vs. pass plays when it comes to risk/reward and the efficiency of goal-to-go strategies.  They also get involved in individual specifics.  There’s a lengthy chapter suggesting how to stop Lamar Jackson and the secrets behind the Rams rushing success (one can only assume New England got their hands on this chapter prior to Super Bowl LIII… but far be it from me to suggest another Patriots-related conspiracy).

I mentioned earlier they used a Bill James approach to analytics.  That’s because these are the same people that brought you the Bill James Handbook.  It is numbers-intensive without losing a feel for the game.  They “chart every FBS and NFL game each season, logging specific data points, tracking player assignments, and creating deep-dive statistical analyses to better understand the game of football.”  Like me reading a racing form, there’s a lot to digest and I’m only betting a few dollars at a time.  For decision-makers within the NFL, there is a lot more at stake, namely their jobs and the well-being of their franchise.  At a minimum, this book will serve as a guideline for NFL teams; at best, it will be their bible.  If you told me an NFL scout slept with this book underneath his pillow before draft night, I wouldn’t be one bit surprised, although he’d likely get a crick in his neck for the size of it.

I full-on expect these books to one day become collector’s items just like media guides and the old Who’s Who in Baseball. 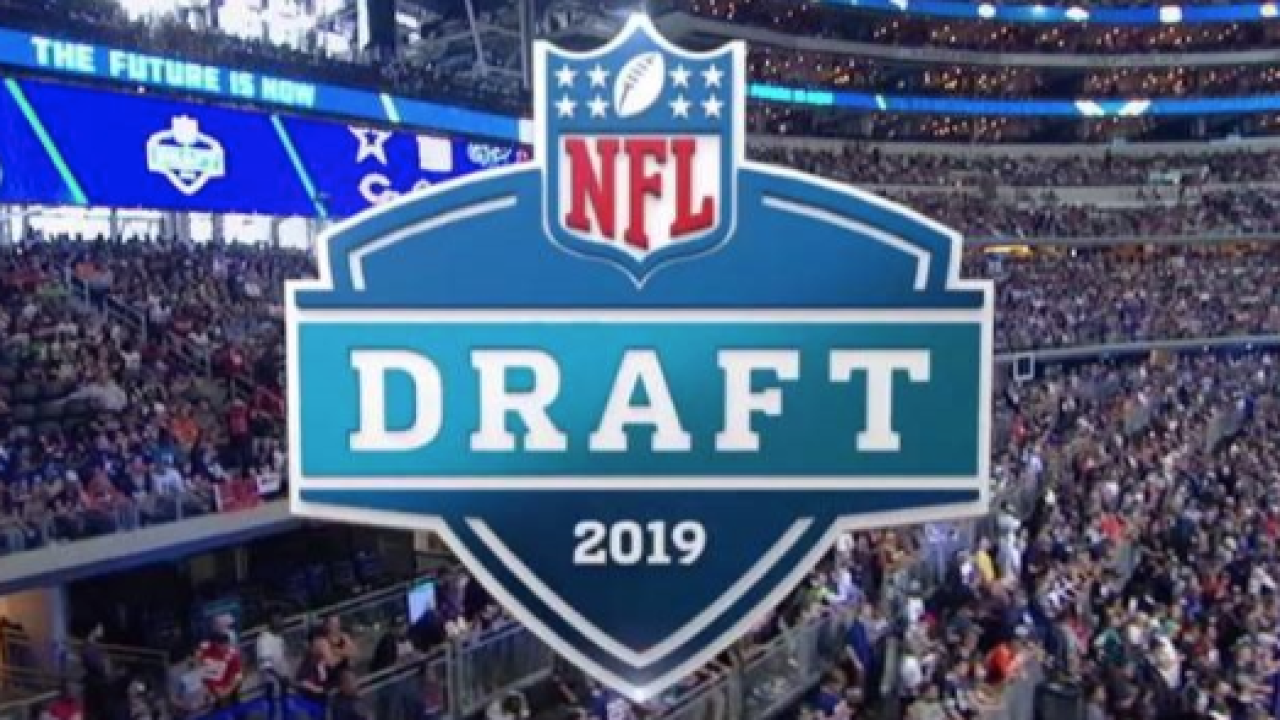 Each individual player’s section reads like a resume, with far more information and considerably better written.  They list a player’s strengths, his weaknesses, his accomplishments, his mission statements.  It is every draft geek’s dream.  They combine all these statistics and assign each prospect a 1-10 rating.  This year’s draft is generally considered weak for quarterbacks (although when has that ever stopped a team from drafting one high)?  SIS ranks Dwayne Haskins first (6.8), Kyler Murray a close second and Will Grier fifth (6.4).  They make note that the best NFL quarterbacks to be drafted, Tua Tagovailoa and Trevor Lawrence, are still playing college ball.  SIS doesn’t expect any of the quarterbacks in this draft to become what they call “difference-makers.”  They’re not too high on this year’s running backs either, ranking Alabama’s Josh Jacobs number one and only giving him a 7.1 out of 10.

When it comes to wide receivers, they rate the internet sensation D.K. Metcalf second with a 6.8 grade behind only Arizona State’s N’Keal Henry.  I wonder if they’d bump him up after the 40 he ran at the combine.  The book is quite stingy with its ratings.  They don’t just dole out 8, 9, and 10s.  I couldn’t find a single 8.0-rated player on the offensive side of the ball.

On the defensive side, however, they do love Alabama’s Quinnen Williams at defensive tackle, giving him a combined 7.4 out of 10.  “Williams is an explosively powerful defensive talent, whose rare interior contact balance creates consistent overwhelming backfield chaos, resulting in next-level force for years to come.”  Mel Kiper, Jr., eat your heart out.  They also love Houston’s Ed Oliver, so much so that they dedicate an early chapter comparing the two. At edge rusher, Ohio State’s Nick Bosa also garners a 7.0.  For you Buccaneer fans who think the team might select another cornerback early, SIS gives LSU’s Greedy Williams, who the Bucs have had their eye on, another solid 7.0, the second-highest ranked corner in the draft behind Georgia’s Deandre Baker.

If you’re a draft nut, you could literally spend hours thumbing through this book, digesting your favorite ball players, stars from your alma mater and if you’re gambling on draft day about who goes where, this book could definitely come in handy.

What I love most about “the Handbook” is that they put their name on it.  They stand behind their decisions.  It’s on paper for all to see unlike the talking heads at ESPN who change their draft boards every broadcast.

SIS has done the ground work for 32 NFL teams.  Now all they need to do is pick the right player and coach ‘em up.