Springtime is here which means it’s that time of year when head football coaches of major college programs go on statewide tours to promote their program and get fans fired up for the upcoming season.  For some of us, it doesn’t take much.

Dan Mullen is one such coach.  Florida is one such program.  Mullen’s stampede of the Sunshine State brought him to Tampa Wednesday to talk about the state of his program in front of a crowd of close to a thousand, thirsty Gators fans.  Refreshments were served.  We Gator fans require it. 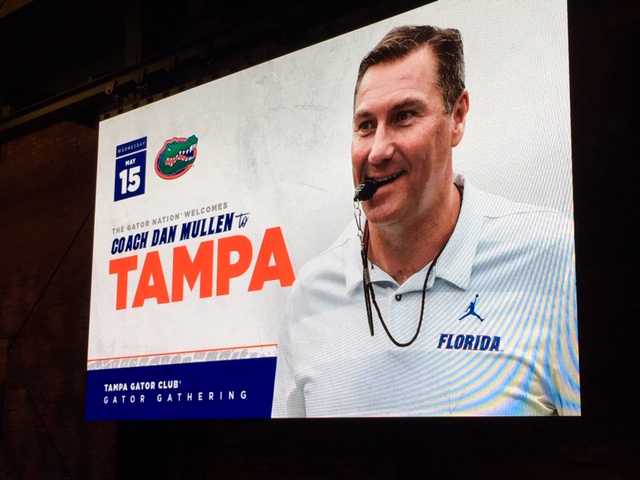 The event was held at Tampa’s newest hotness, Armature Works, a red brick building complete with trendy restaurants and giant conference hall, all right along the Hillsborough River on the edge of downtown.  I was accompanied by two hot dates, both ardent Gator fans in their own right, for that is how SportsChump rolls.

The crowd was full of bustling Gator fans, some dressed casually, others just getting out of work in suit and tie, all of whom sporting some semblance of orange and blue.  You could overhear chatter of Billy Donovan to Michigan rumors and recollections of big plays from last year and yesteryear.  We Gator fans like to reminisce.  What better coach to inspire us to do so than one who helped win us a national championship?  Dan Mullen once again has Gator Nation abuzz. 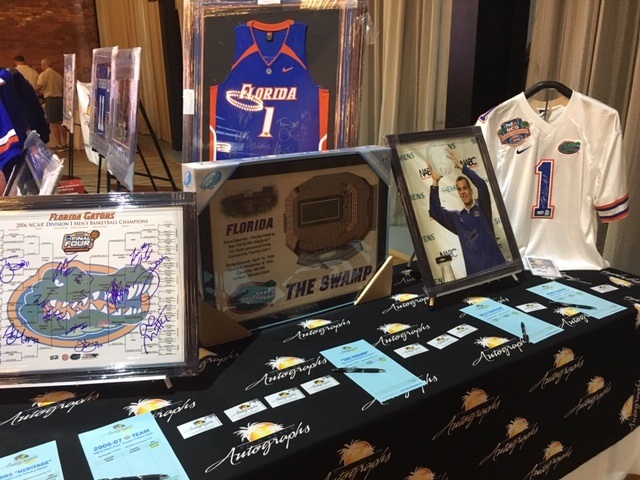 Mullen took the stage late which gave me time to both bid on silent auctions, which I lost, and digest a few handfuls of complementary empanadas, which I won.  When coach finally began his hour or so long talk, he was engaging, personable and quite often funny.  Most importantly, he was inspirational which is what you expect from a head football coach.  I knew he was the right man for the job.  I was even more confident of that after hearing him speak up close and personal.

Dan Mullen cares about winning football games but ironically not about how many he’s won.  He can’t tell you with any certainty how many times he’s walked off the field victorious as a head coach (the answer is 79).  He can tell you, however, about the lives he’s affected.  Of that, Mullen is far prouder for that, he preaches, is far more important.  When you’ve coached (and won with) the man his family still lovingly calls Timmy, it’s tough not to bring that up in front of a crowd of hooting and hollering Gator fans.  He used Tim Tebow as an example of a young life he affected who is now doing that for millions of others.  Championships are nice, impact is far more long-lasting, or at least that’s Mullen’s philosophy. 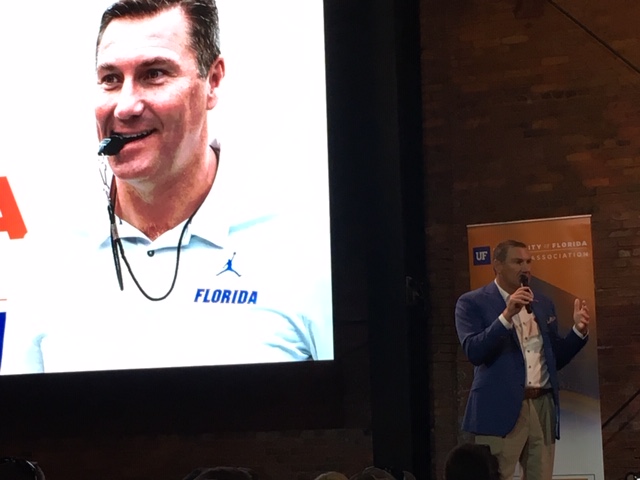 Of course, the event featured its obligatory ribbing of other SEC schools.  Coach boasted that UF is the only public school in the nation ranked in the top ten in both academics and football.  He joked that in academics, Florida is far closer to Harvard, Yale and Princeton than it is to Alabama, Auburn and Georgia.  LSU and FSU jokes also reared their beautiful heads.

Aside from doing the right thing by his players and staff, Mullen’s objective is getting Florida back to the championship level that his predecessors, Urban Meyer (who he worked for) and Steve Spurrier (who he works with) both brought to Gainesville.  Note: Mullen’s impression of coach Spurrier is also spot on.  Mullen reminded us its considerably easier to take a team from four wins to ten than it is to take them from ten to eleven.  The margin for error is that much smaller but that is now the task that lay in front of him.  That’s what Gator faithful have come to expect and he is keenly aware of those expectations.  They are no greater than the ones he sets for himself.

Mullen is a man who loves what he does and he asked the crowd the same thing, to think about why we do what we do and in what way we impact others in a positive manner.  For example, he remembers not who won the World Series or Heisman Trophy way back when but he sure remembers his second-grade teacher and the positive impact she made on his life.

He also talked about Dak Prescott, a man who he recruited and coached at Mississippi State.  Prescott didn’t have it easy growing up.  All he knew is that he wanted to play football.  Mullen saw in Prescott what others did not.  He joked that Prescott, a kid from the small town of Sulphur, Louisiana, would have crawled to LSU had they accepted him.  They didn’t.  Mullen did.  Now he’s the starting quarterback of the Dallas Cowboys, which was his life-long dream.

He referred to Prescott again when an audience member asked the obligatory and rather annoying question about Florida’s conspicuous absence of five-star recruits.  In recent weeks, Florida has faced a number of transfers and lacked behind other SEC schools in landing top-ranked, high school talent.  Mullen responded that athletes some see as a five-star, he might not and those he sees as five stars, others might not.  Dak Prescott was no five-star athlete.  He reminded the crowd that the average star rating of those players taken in the first round of last year’s NFL Draft was 3.1.  Coach is not concerned with the stars that websites give high school athletes.  He trusts his process, as he should for it is one which brought ten wins to Gainesville a year after they only had four.  He is confident in the direction he has the school going and in the kind of student-athlete he recruits.  He is not about to let anyone tell him otherwise.

He holds his student-athletes and his staff accountable and that begins with trust.  With accountability, comes trust and with trust, comes success.  He rah-rahed the crowd into attending games on Saturday, promising that the team feeds off the energy of the crowd. 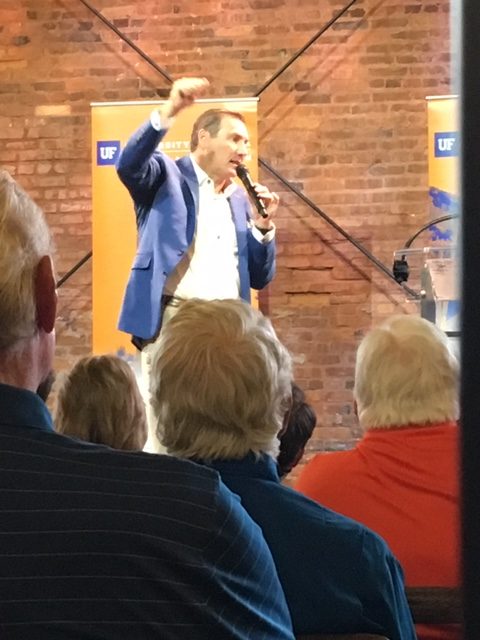 When asked about his current quarterback, one who improved in leaps and bounds in only one year under Mullen, he reminded us that playing quarterback at the University of Florida, a school whose football stadium boasts statues of three Heisman winning quarterbacks as you walk through its doors, is no easy task.  Feleipe Franks, Mullen told us, made his biggest leap as a quarterback once he silenced the outside noise of fans and social media and focused on what his coaches were telling him instead.

Mullen finished by recounting the decision to come back to Gainesville and how it all came about.  Returning to Florida, while perhaps a goal, was never really on his radar.  The head coach of Mississippi State for nine years after leaving the Florida sidelines as an assistant, Mullen and his family were happy in Starkville.  He won at a place where people said he couldn’t and even brought the Bulldogs the school’s first ever number one ranking.  Over the years, his name was linked to numerous jobs but, a man of principle, he never listened to any of them, especially during the season while he was coaching his players.  Then, in 2017, two days after the Mississippi State season had ended, he was watching the Florida-Florida State game at home with his wife.  He received a phone call from Scott Stricklin, Florida’s new athletic director.  It was a call he thought he should probably take.  It was during that phone call that he agreed to become the new head ball coach at the University of Florida.  The rest is a history that is still being defined.

Mullen is cut from a different cloth.  He is a man who can command a number a of different rooms: a conference hall full of Gator alum, a locker room full of uniformed and shoulder-padded young men and a living room full of recruits who want to learn how to play college football at its highest level.

While readily admitting that Florida surprisingly lacks behind in the SEC in facilities, he promised that changes will be coming the right way.  They will not settle.  Expect big things from the school in the coming years.  Mullen is confident of that.  It is a confidence he instills in his players.  It’s a confidence he instilled in the crowd Wednesday night.

After hearing the man speak at length, I’m confident Dan Mullen’s a man who can get things done.  He left a crowd full of fans inspired and ready for football.  He’s the kind of coach any program would be happy to have… and he’s ours.  Go Gators! 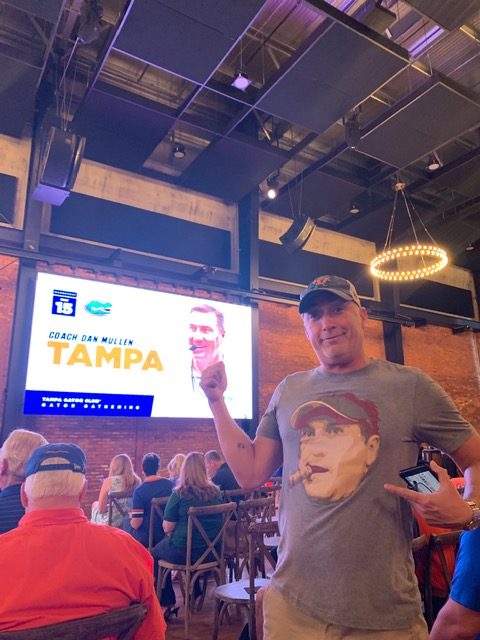