We’ve talked before about the beautiful inevitability of the NBA.  What I mean by that is, headed into this season, we all knew who was going to win this year’s championship.  We just didn’t know the path they would take.

Like it or not, the Golden State Warriors were (and still are) head and shoulders above the rest of the league.  With LeBron heading westward, the Eastern Conference playoffs provided some long overdue drama.  For the first time in nine years, a team without LeBron would represent the East in the NBA Finals.  That team has become the Toronto Raptors.  But out west, the unbeatable team to beat was still Golden State.

Gambling in the time of dynasties is a surefire way to make money, as long as you don’t mind shelling out a little coin.  For example, if you like the Warriors in this series, as you should, your number is -290.  However, the shrewd gambler could have found a much more agreeable number earlier in the playoffs.  Pinpointing the right time to place a wager can lead to a far more favorable payout.  We’ll get to that in a bit.

But first, by popular request, your Bucks-Raptors recap.

I placed a steak dinner wager on the Eastern Conference Finals with someone who really wanted to see the Bucks win.  She thought they were the better team.  She wasn’t alone.

The Bucks were considerable favorites in a series I was sure they would lose.  I even put my name on it before the series started.

As much as I look forward to this year’s Conference Finals, it’ll be hard to surpass the four series we just saw in the semis. Not that anyone cares but I’ve got Golden State beating Toronto in the NBA Finals.

I was mocked for my prediction.

I couldn’t quite put my finger on all the love for Milwaukee.  Sure, they had league’s best regular season record but if the 2018-19 Tampa Bay Lightning proved anything, it’s that regular season means little.  All I can think is that ESPN had showered us with so much Giannis-love that America fell for the better player they thought was on the better team.

They were wrong on both counts.

Milwaukee took a two-games-to-zero lead over the Raptors but then lost the next four.  If you were paying close enough attention to the lines, and had a pair, you could have cleaned up.  Some of us did just, for like I said, I didn’t find the outcome of this series all that surprising.

In Game Three, a game the Raptors needed to win, they were only two-and-a-half point favorites.  That’s a possession.  Needless to say, they covered.  In Game Four of that series, the Raptors were, for some inexplicable reason, home underdogs.  Again, you could have cleaned up and again, some of us did.  In Game Five, back on the road, they were +250 underdogs!  Again, easy money if you liked the Raptors, and why wouldn’t you?  If they were going to win the series, that was a game they had to win.  And they did.

Toronto was the far more experienced team.  While Kawhi Leonard was seen limping around, he still has considerably more playoff experience in his left pinky toe that anyone on the Bucks.  As does Marc Gasol who was a brilliant mid-season addition to a team that needed size, minutes and smarts.  The Bucks were talented but young.  Their superstar player is only 24 and had not yet played in games of this magnitude.  24-year-olds not named Magic Johnson or Larry Bird do not win NBA Championships.  Giannis is talented.  He is arguably a top five player in today’s game but he still has a long way to go before he becomes a truly transcendent player in this league.  Kawhi already is.  That’s why my money was on Toronto. 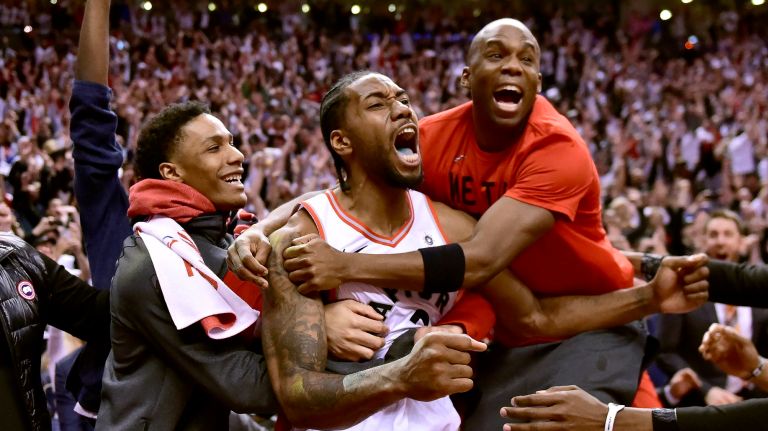 And now for the series to come.

Toronto Raptors made history by advancing to the NBA finals for the very first time. The team is preparing for their Thursday game against the Warriors but latter are heavy favorites at every sportsbook. Although odds vary significantly from site to site, the consensus is that the Warriors will come out of this at the top again. For those who are planning to make a bet, make sure to price shop to and find the site that offers the most value. Here’s a few from Sports Betting Dime to get you started. Notice that each site has been reviewed based on a few different factors, which you can read more about if you click on each individual review. Word of advice though, don’t bet on the Warriors just because they currently have the best odds. Keep in mind that the Raptors won 2-0 against the Warriors during the regular season and that was done without Kawhi Leonard.

If you like the Raptors, bet them now.  Or you can wait to see what happens in Game One.  Remember, series prices will fluctuate after each game.

Knowing when to place a wager is key.  For example, I am currently considering myself the smartest man alive by loading up on Golden State after they lost Game Four to the Houston Rockets.  At that point, Vegas listed them at -110 to win the title.  Assuming the Warriors handle the Raptors, which they should, I’ll be patting myself on the back for years to come.  $220 at -110 comes back $200.  $220 at -290, which is what they are now, comes back $76.  You could probably have gotten even better than -110 once Durant went down with the unforeseeable calf injury but you can see the importance of investing at the right time if you just pay attention.

These Finals are a little more difficult to predict.  Here are your exact outcome props for the series:

If I had to place a wager on the exact outcome, I’d go with the Warriors in either five or six games but I’m laying off considering I already have money on them to win the series outright.  Even without Durant and Cousins, I still don’t see how Toronto can hang with Golden State.

Stranger things have happened.   In this particular Finals, however, I just don’t think they will.

3 Replies to “Basketball Wagering Made Easy: Your NBA Playoffs Edition”