It’s getting to be that time, Buccaneers fans. We knew it was coming. Tampa Bay is on the clock and it’s starting to tick aloud.

Your starting quarterback for the Tampa Bay Buccaneers is in the fifth and final year of his rookie contract. That means that finally, after all this time, the Bucs are going to have to shit or get off the pot when it comes to making a decision about Jameis Winston.

Now, before all you Jameis-haters suggest cutting the man loose, I’d like to look at this objectively for it is our beloved Buccaneers we are talking about here. Someone has to take the snaps and it can’t just be a guy not named Jameis. 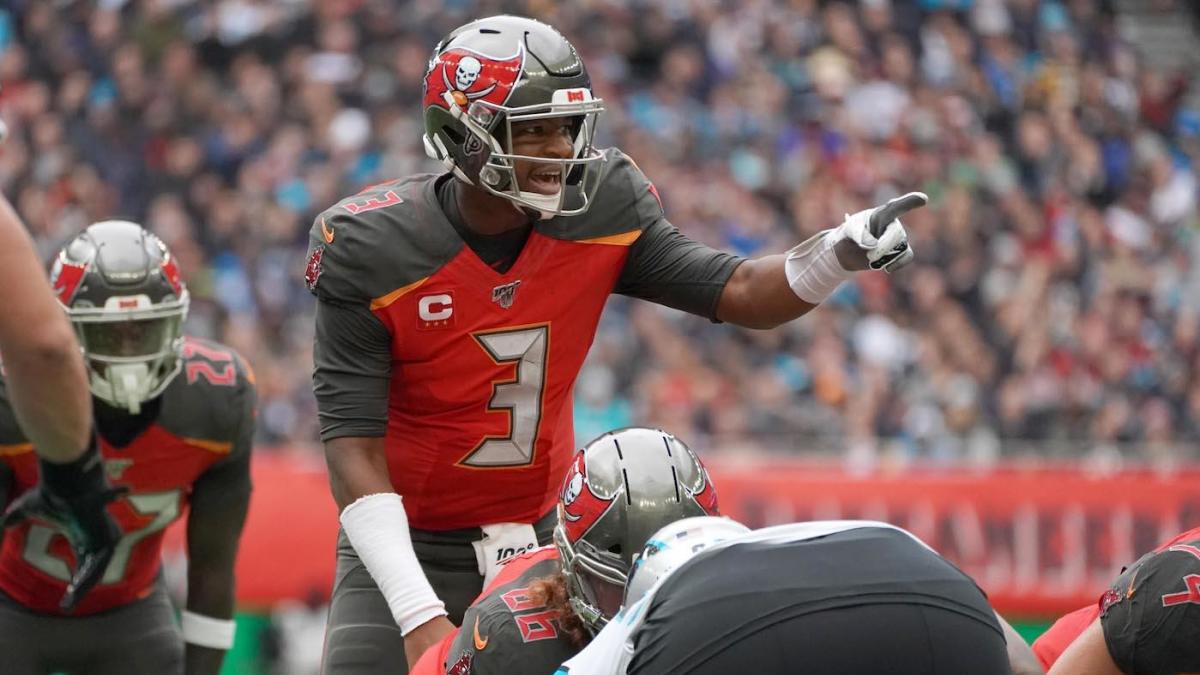 The way I see it, the Buccaneers have three options, for which logical arguments can all be made. They can cut ties with the 25-year-old, interception prone quarterback. That would make a LOT of people in the immediate Tampa Bay area very happy. Trust me, I listen to plenty of post-game coverage every week on local sports radio. Let’s just say that aren’t too many pro-Jameis calls that make it through the screener.

The second option is obviously to re-sign Jameis to a multi-year deal. The going rate for an average starting quarterback in the NFL is, well, it’s a lot. It’s the most important position in professional sports and those who play it, even those who play it poorly, are well compensated. I’m not exactly sure what the tab for Jameis Winston would be but I’m pretty sure his camp wouldn’t allow him to take too much less than the going rate just because he’s thrown a few (okay, more than a few) too many interceptions.

The third and probably most viable option would be to put the franchise tag on him.

I can see the steam coming out of your ears from here but before you all get your panties in a wad, let me explain what the NFL franchise tag means and why in Jameis’ case, it makes sense.

Every year, each team can designate one player whom they wish to franchise. While it sounds like a cool, prestigious label, most players don’t like being “franchised” because it only gives them a one-year deal. In a sport where players drop like flies, the franchise tag gives that player no security about the years to come. If he gets carted off the field, that’s pretty much the end of his days. God speed, my friend.

According to the league rules, the franchised player will receive the average salary of the top five players at his position. In 2018, the salary for a franchised quarterback would have been around $24 million, which is essentially what the Buccaneers paid Jameis in 2019.

So, let’s discuss the three options with all things considered… and let’s be sensible about this, children.

The horde of people lining up to help Jameis pack his bags is lengthy. While often agile, mobile and hostile, the man has made some questionable decisions both on and off the field. Let’s talk about the on the field ones as they’re the ones that matter on game day.

Winston has been an interception-throwing, football-fumbling machine ever since he first landed in Tampa in 2014. Under Winston, the Buccaneers have had one winning season (9-7 in 2016) but to be fair, this isn’t really a franchise known for its winning seasons. Over that time, Winston has thrown for 107 touchdowns. He is Tampa Bay’s all-time leader in passing yardage. He has also thrown 76 interceptions and fumbled the football 49 times. That’s a lot when you consider he’s only played in 66 professional football games. Where DOES he find the time? 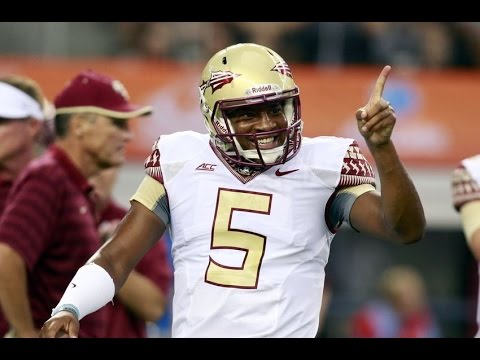 Anyone who watched Winston play at Florida State knew he was prone to such behavior. He had the Superman mentality, wanting to be a hero on every play. Throwing the ball away was not in his repertoire. Throwing the ball to the opposite team was… and unfortunately, still is.

Turnovers are momentum killers in the NFL. They are also season killers and quite often career killers. NFL teams who turn the ball over more than they force turnovers simply do not win football games.

Jameis Winston is a quarterback who will continue to turn the ball over. That’s what he does. What head coach Bruce Arians, aka the Quarterback Whisperer, needs to teach him is to do that less. Considerably less.

Word from Bucs camp is that Arians is a fan of Winston’s. Arians likes gun-slinging quarterbacks and Winston is just that. Now, this is either the case of a supportive coach believing a young man can change his ways… or a bull-headed coach who refuses to face reality, thinking he can turn anyone into a championship quarterback when he in fact cannot.

As of yet, that remains to be seen. But it’s safe to say that if the Buccaneers cut ties with Jameis Winston, there will be plenty of other teams out there willing to give this kid a look. Knowing they might be able to get him for a reasonable price, there are far more than a handful of teams that will pick up the phone to call Jameis’ agent the day he is released.

Quarterbacks are expensive, especially when you sign them to a multi-year deal. Six quarterbacks in the league this year made $30 million or more. Another 13 make $20 million or more. While Winston might not demand upper echelon money, he’ll still be making in the neighborhood of $25 million a year. Considering NFL players generally don’t sign short contracts, it’s safe to assume that if the Bucs opted to re-sign Jameis, they’d have to do so for a minimum of four years and pay him a minimum of $100 million. That’s a conservative estimate.

If the organization does that, despite Arians’ blessing, you might have more than a few picket signs outside Raymond James Stadium. We’re not exactly known for being a supportive fan base. (See: pre-season, mini-camp booing of Robert Aguayo in 2016).

That is the nature of the beast. If you don’t have a winning quarterback, you’re not going anywhere in this league. What the Bucs need to determine after all these years is whether Jameis Winston is that guy.

Which is what makes option three the likeliest and most viable option.

I have to credit Uno Testikale. He was the first person I heard mention this as an option and I hate to say it but it makes perfect sense. The best play here is to franchise Jameis Winston.

I know that by this point I can speak freely about extending Jameis one more season because by now all the haters have already clicked off the page and forever cancelled their subscription to SportsChump.

While it seems ludicrous that after five years, this organization still hasn’t made up its mind about what to do with Jameis, franchising him is the perfect option. It gives them one more year.

The quarterback whisperer has only been here a season and if you’ve paid close enough attention, Jameis has made strides. With limited time to throw (FIX THE OFFENSIVE LINE!), he’s made better decisions at a higher rate. Yes, the interceptions remain. Yes, you have Bruce Arians saying things like “Jameis really only has ten interceptions” when on paper he actually has 18… and counting. But the fact remains that Jameis has made progress. And he’s only 25 years old. 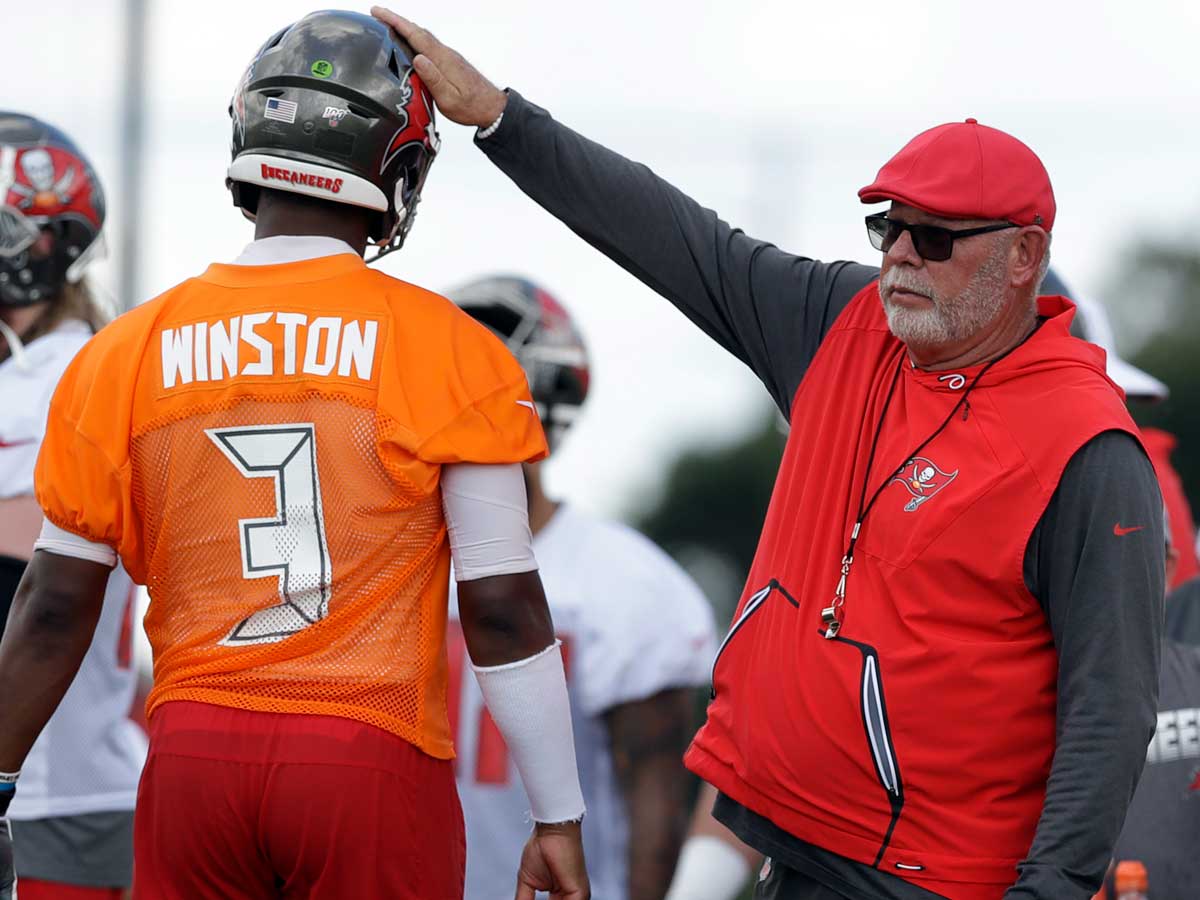 The fact also remains that there are limited other options at quarterback. This year, we saw starting quarterbacks drop like flies. There are a scant few starting QBs in the league that haven’t missed time. It’s why we’ve heard of names like Gardner Minshew, Kyle Allen, Trevor Siemian and Jeff Driskell.

Cutting Jameis means starting either Blaine Gabbert (please no) or Ryan Griffin who has clipboard marks singed into his palms.

Name one free agent quarterback of next year’s crop who would immediately come in and turn this franchise around. That, my friends, is a very short list that contains few quarterbacks you’d rather see lead this team over Jameis… even if you’re over Jameis. The Buccaneers will have a valuable draft pick but starting a rookie, unless you’re landing LSU’s Joe Burrow (which they won’t), is no better answer. And even if they do land, let’s say, a Jalen Hurts, there’s no guarantee he’ll turn into the next Lamar Jackson. That too will take time.

By franchising Jameis, they’ll end up having to pay him a pretty penny in 2020 but it’s only a tad more than they paid him in 2019. He’ll have one more year under Arians to see if he can continue to make progress and progressions. By the end of that season, they’ll be able to (finally) make a well-educated decision on whether Jameis is their guy or whether they should part ways with no hard feelings.

I can count on one hand (probably on one finger) how many nice things I’ve had to say about Jameis Winston on this website over the years but as a (slightly) impartial observer, I’m here to tell you that franchising Winston for 2020 makes the most sense.

Unless Arians and Company have a Plan B that we don’t know about, unless they have a quarterback in the wings that is beating down the doors to play behind a shoddy offensive line, you’re likely looking at another 16 games of Jameis doing his thing.

There will be interceptions, people. There will be fumbles and dropped balls. There will be sacks and bad decisions. But the best decision might just be to give this kid one final chance to learn the system and prove his worth.