Let’s talk about race for a quick moment, shall we.

The hole Myles Garrett is digging for himself apparently knows no bottom.

If you stayed up to watch the very end of last Thursday night’s football game, er… melee, you saw something that the NFL, NBA, MLB and every sport not named the NHL is doing their best to avoid: a knock-down, drag-out brawl between its opponents.

In the final ten seconds of a game the Cleveland Browns were winning handily, super stud defensive end Myles Garrett broke through tackles to put Pittsburgh Steelers quarterback Mason Rudolph on his backside.

Shortly after that, pandemonium ensued. 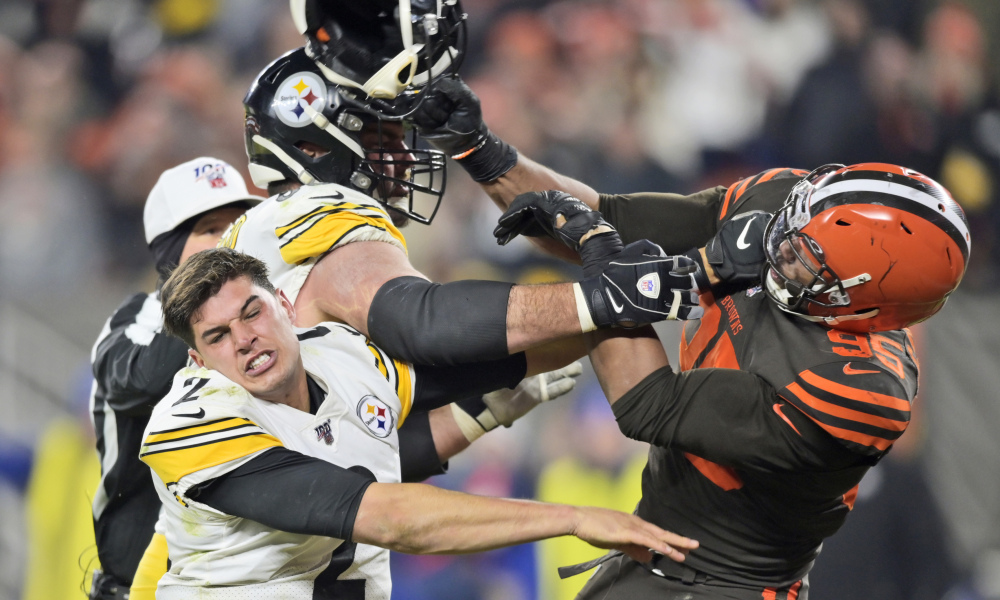 Rudolph did not take to the tackle lightly. He grabbed Garrett by his helmet as Garrett continued to stay on top of him. That’s when Garrett grabbed Rudolph by his helmet and ripped it off him.

This is already a no-no in the NFL. What happened seconds afterwards, as Garrett would soon find out, is a far more suspendable act. Garrett and Rudolph tussled on the ground then were quickly separated by two Steelers offensive linemen, Garrett taking Rudolph’s removed helmet with him.

Rudolph then went after Garrett and the rest is recent history. Garrett swung the helmet at a charging Rudolph, swinging it downward, grazing the quarterback’s head in what could have been a far more serious injury in a league that’s doing its best to prevent head trauma.

Emotions flared, flags thrown everywhere, players were ejected and speculation immediately began as to how long Garrett would be suspended. Word came the next morning from the league office that he would be suspended indefinitely. That later turned into the rest of the 2019 season.

In public statements released days afterwards, both players owned up to their actions and apologized. Garrett appealed his suspension but it was upheld. Most agreed that Garrett’s display of contrition was the right way to go about things. His emotions got the best of him. He could have inflicted serious harm on another but would be back next season once his suspension expires.

It seemed like all was said and done until Thursday morning when news of another inexcusable act emerged from the Garrett camp. Instead of leaving well enough alone, taking his suspension like a man and seeking out some anger management classes, Garrett accused Rudolph of dropping a racial slur which caused Garrett to lose his cool.

To be clear, I was not in the scrap heap as these two NFL players went down violently. Thank goodness for that. I don’t know what was said, shouted, or uttered as Garrett body slammed Rudolph onto the turf. If it’s true and Rudolph did drop an N-bomb to provoke Garrett, well it’s clear he got what he deserved, a helmet to the temple was justifiable and then some. But if not…

I don’t know Mason Rudolph. I’m also of the far more liberal variety. I don’t know how many N-Bombs are dropped on an NFL field during an average NFL game. I can only assume the number of white players using that word towards black players is probably kept to a minimum. Otherwise, we’d be seeing a lot more helmet swinging.

However, the only thing worse than a grown man dropping an N-Bomb in spite, and there is little worse than that, is a grown man accusing someone of doing so when it didn’t actually happen.

The NFL is a fascinating American case study in race. Ask anyone who’s played in the league and who’s spent time in an NFL locker room and they’ll be the first to tell you that race is far less of an issue than you would think considering the tension, violence and racial composition of the sport. That’s because white and black players have been playing with and against each other all their lives. The NFL is a brotherhood where these issues are really only highlighted by those not wearing a uniform.

It’s one thing for Garrett to swing a helmet out of frustration. It’s entirely another to bring up race where it doesn’t exist. While crumpled under Garrett, if Rudolph said something along those lines then by all means, let’s get it on. However, if Garrett is full of shit and Rudolph said nothing of the sort, then perhaps the commissioner should consider lengthening Garrett’s suspension. 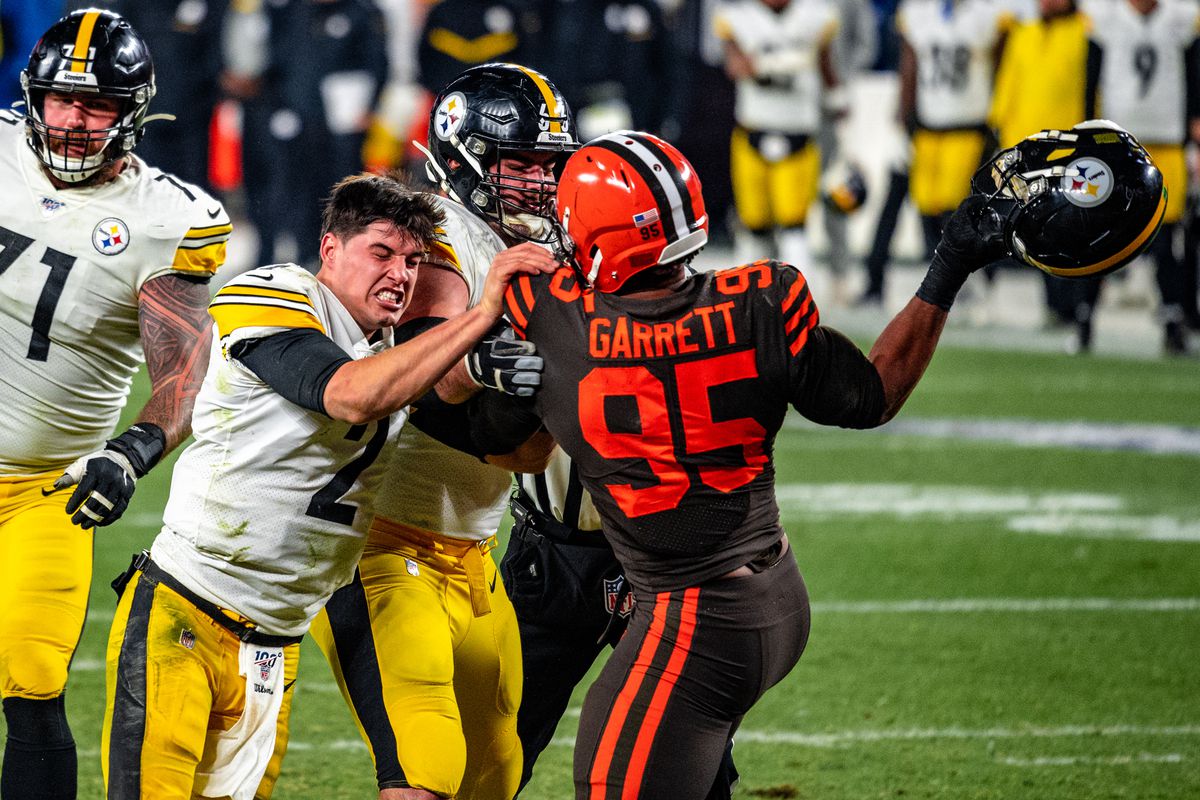 In a game comprised of many shades of skin, ethnic and socio-economic backgrounds, there is hardly room for that sort of foul play. There is even less room for making that kind of shit up where it doesn’t exist. The NFL followed up their investigation by saying there is no evidence Rudolph used a racial slur. I’m not too sure how they came to that conclusion but that’s their story and they’re sticking to it.

I can’t help but wonder, if there was a way to find out the truth about what happened in that pile, to find out what was said or not said, if we could employ a lie detector or better yet Wonder Woman’s golden lasso and tie it to them both so that they would be forced to tell the truth, I wonder which one of these two men would bet their livelihood on it. If we put both Rudolph and Garrett into a room, sat them side by side and demanded the truth, would they stake their careers on their story knowing one of them would never be able to play in the NFL again?

While the entire sports world came down hard on Garrett, I’m one of the few who gave Garrett a soft pass for swinging his helmet out of anger. It’s football. Shit happens. But to suggest that Rudolph dropped an N-Bomb if he did not and then use that as justification for his actions? Well, that’s lower than using any football helmet as a weapon. That’s using our history as one.

So, either he said it or he didn’t it and Garrett misheard it. For right now, Garrett is sticking to his story, suspended from play and waiting for next season. Rudolph will start this Sunday for the Steelers. I’m not sure we’ll ever get to the bottom of this which is almost as unfortunate as the fact that any of it happened in the first place.

9 Replies to “Helmet throws and N-Bombs: A down and dirty week for the NFL”