I should preface this post by saying three things:

So, let’s begin with the understanding that… I love the film Independence Day, in all its guilty, cheesy, Hollywood gloriousness. It’s just a great action movie (a premise with which you’ll likely agree) that holds a fair amount of merit (a premise with which you might not). It is, by Dub’s definition, also a ‘disaster movie.’ What screams disaster more than aliens dropping by Earth to exterminate the entire human race? Point, SportsChump. 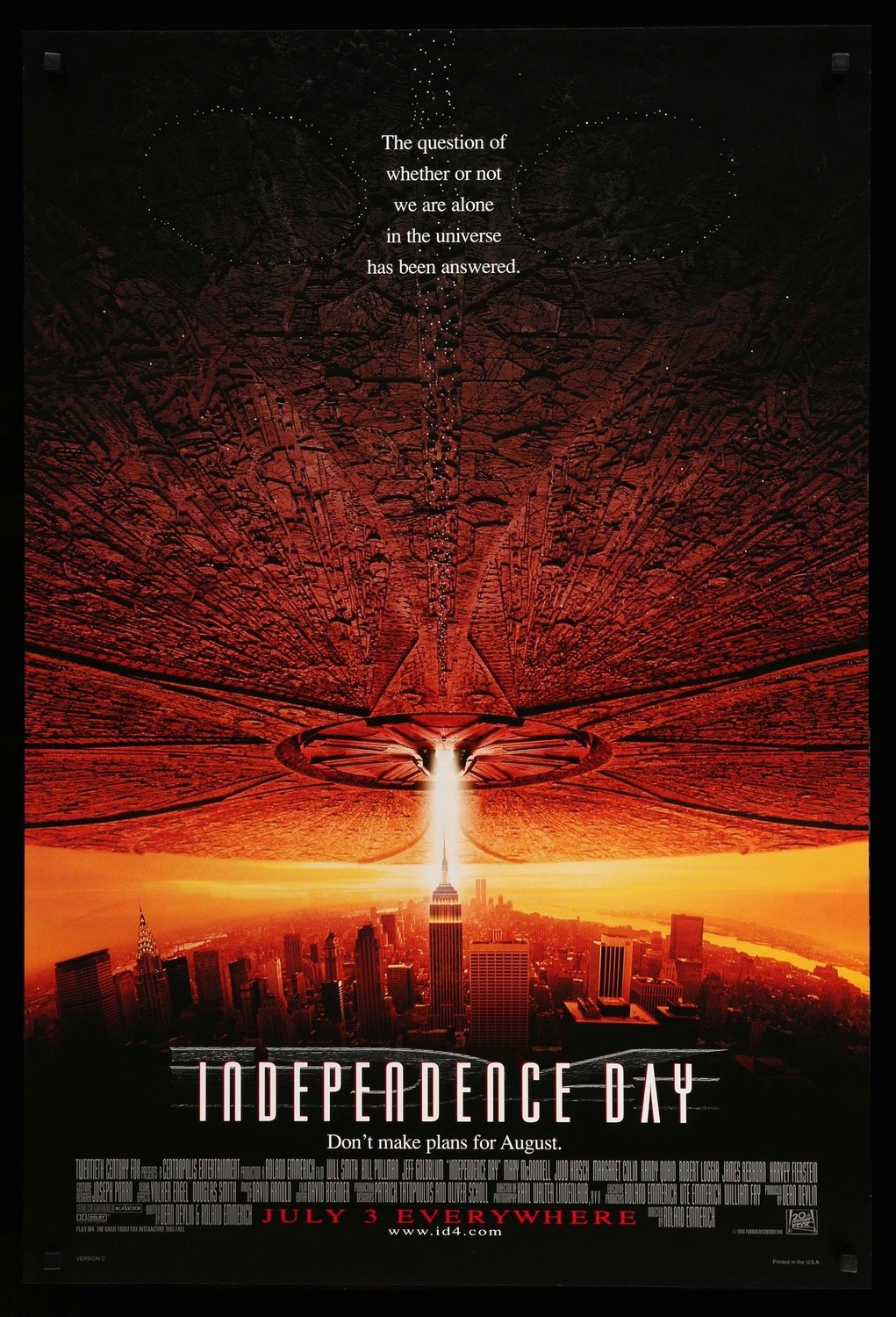 Now, on to the hashish. In 1996 when Independence Day was released, I was returning from a trip to Europe with my then fiancée. Having spent far too much time in Amsterdam (not enough), I decided to be bold and mail myself back some hash.

I did so, of all places, from the airport. Perhaps not the smartest thing I’ve ever done in my life but I never claimed to be Einstein, case in point my love for Independence Day.

Knowing that coffee grinds throw off the scent of dogs, I decided to include some in the manila envelope, along with the hashish, that I would send back to my address in the United States. Except I couldn’t find any coffee packets. So, in the manila envelope, addressed to a fictional person who lived at my address, I placed two, things: hashish… and tea bags. It was the closest thing I could find to coffee.

All that being said, the hash got their safely (neither rain, nor sleet, nor hashish sticks) and I smoked some on my way into the theater before seeing Independence Day for the very first time.

Needless to say, that enlightened the experience.

I should also add that, years later, even without the Amsterdam hashish (unfortunately), the film still holds up as a mid-90s blockbuster. It was the 4th highest grossing movie of the decade.

The plot, in a nutshell, involves a black man, a Jewish man and a Southern man as they team up with the President of the United States to defend the human race from alien invasion. If that doesn’t scream blockbuster, I don’t know what does.

It bears note that it is also one of the first major Hollywood films I can recall that started blowing up shit. Like real shit. This was before 9/11 (in fact, you see the Twin Towers in the film, God bless ‘em) and it was the first time I ever saw iconic American buildings, i.e. the White House, the Empire State Building, the Capitol Building, being blown to smithereens, whether by terrorists or creatures from another planet.

This might not seem like much now but back then, especially under the influence of the hashish, seeing these monuments blown up on the big screen was a big deal. Thank goodness for Will Smith. 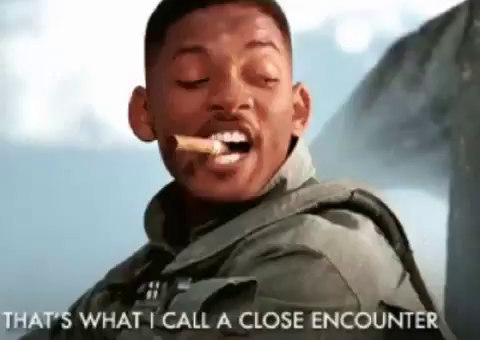 The movie intertwines the lives of Bill Pullman (war hero president), Jeff Goldblum (neurotic, environment-loving scientist), Will Smith (fighter pilot with aspirations of one day being an astronaut) and Randy Quaid (retired Vietnam veteran who was once kidnapped by these very same aliens). All four are proven actors perfectly capable of delivering formidable one-liners, both dramatic and comedic.

In Independence Day, all are involved in dysfunctional relationships: Goldblum whose wife left him, Smith’s failure to commit to his stripper wife and Quaid’s struggles with alcoholism. Pullman is the only one of the four in a normal relationship and his wife dies in the film. Go figure. The film is also loaded with cameos: Robert Loggia, Harry Connick, Jr., Judd Hirsch, Vivica Fox, that guy who played Data on Star Trek and James Rebhorn who plays Pullman’s sniveling Secretary of Defense.

The film begins with the discovery of a “radio signal from another world” as R.E.M.’s “It’s the End of the World as We Know It” plays gratuitously in the background. We soon find out that the aliens who sent those signals aren’t here on vacation. Enter our heroes one by one.

As these unknown objects enter our radar, the White House panics, kind of like it’s doing now. There is mass hysteria and widespread panic as no one knows what to do. Before the alien strike, the film shows people shouting “I hope they bring back Elvis” as they gather atop skyscrapers, awaiting their demise. If you think the film doesn’t accurately represent how people act when shit gets weird, you might want to watch it again. It is spot on! 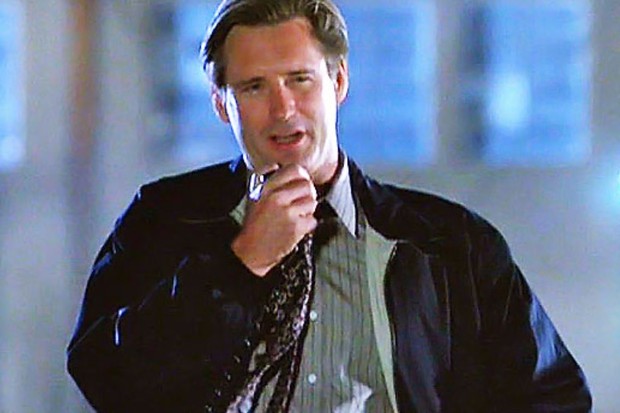 At the same time, Pullman, who plays perhaps cinema’s most ideal president ever (a former fighter pilot who speaks in a raspy voice and has extremely presidential hair), comforts his panicking Oval Office “I don’t want to add to a public hysteria that’s going to cost lives. I will advise people not to panic. The best idea is to stay in their homes.”

Does any of this sound familiar? (Except, of course, for the ideal president part.)

The aliens finally hit Earth, strategically placing themselves over key areas and all hell breaks loose. Pullman’s advisor asks the president what he wants to do. He replies “Address the nation. There will be a lot of panicked people out there.” Can I get a Pullman/Smith ticket in 2020!

About 45 minutes in, shit gets crazy. Call me insane, call me cheesy, say that I don’t know shit about movies (you’d be wrong about one of those three for sure) but that sequence where the aliens start blowing up everything in sight is one of Hollywood’s most riveting sequences of the ‘90s. If you’re not moved by watching entire cities decimated, then I don’t care who you voted for, you’re not a damn American!

The movie is heavy on military presence which is what differentiated Aliens (the sequel) from Alien (the original) and made it a far more successful, box office hit. There’s no denying Independence Day tugged at America’s heartstrings with fighter planes flying through the air “anxious to whip E.T’s ass.”

Ironically, President Pullman and his United Colors of Benetton discover that uploading a virus into the alien’s network is the only way to shut down their defenses and allow for the world’s military to “bring those sons of bitches down.”

The frightening and overarching premise of the movie is that the government had been hoarding alien bodies in its Area 51 for years. They knew these things existed and that another attack was possible. Pullman was kept unaware for “plausible deniability.” While our president remains delightfully uninformed, Independence Day hints at the secrets that government might be keeping from us all.

You know how the rest of it ends. The empire strikes back and world order is restored… just with a lot more damage and considerably, fewer buildings. But what I love most about Independence Day is its overarching message: that a united mankind can conspire to save the world against any foe, alien or viral.

Or maybe I’ve been smoking too much hash.